Franklin Graham is out of his mind

Franklin Graham is out of his mind.

And so are the tens of thousands of people who agree with him. 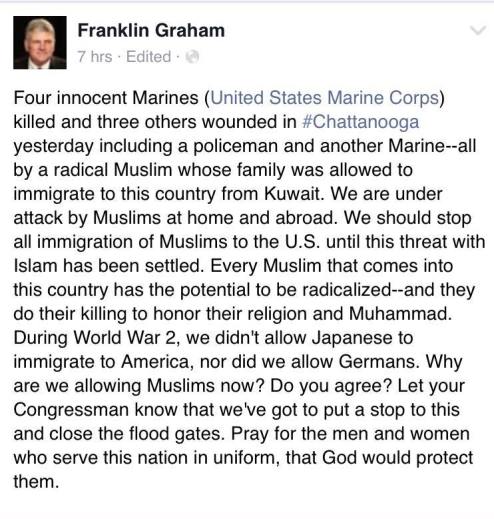 In response to the shootings at Chattanooga military recruitment offices, Graham suggested “we are under attack by Muslims at home and abroad. We should stop all immigration of Muslims to the U.S. until this threat with Islam has been settled.”

Matthew Paul Turner, a better Christian than I, suggests that goodhearted Christians contact Graham and:

“Tell him that he’s a part of the problem. Tell him that this isn’t love or mercy or compassion or peacemaking. Let him know that this is hatred. This is divisive. This is ungodly. Please make your voice heard. Be kind. But be emphatic. Please tell him to stop vocalizing his vile messaging under the guise of Christianity.”

I can’t be kind, because evil poison pouring out of people like Franklin Graham is destroying the message of Christ and the spirit of the United States.

Graham is so insane, or so ignorant of U.S. history, that he points out that “during World War 2, we didn’t allow Japanese to immigrate to America.”

He’s right. Not only that, the U.S. government rounded up all Americans of Japanese descent and put them into camps. Our nation violated the dignity and human rights of thousands of citizens for the sake of national security. Evidently something Graham would have no problem with, today.

Evacuees of Japanese descent among the first 664 to be removed from San Francisco, California. April 16, 1942.

One person’s forced relocation is another person’s ‘security.’

In fact, some of the internment camps are still around, 60 years later. 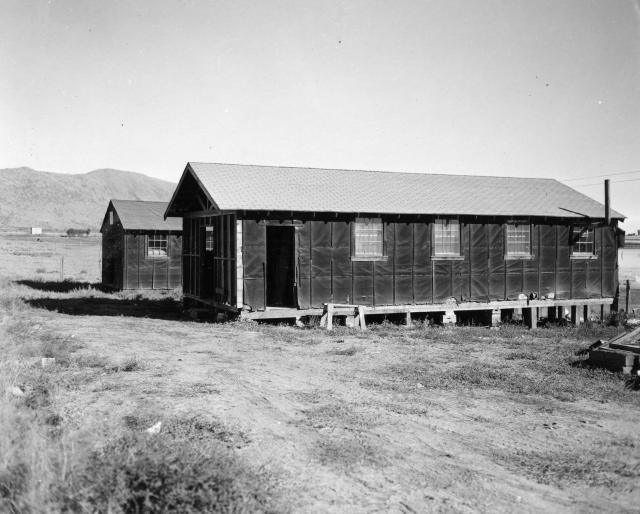 Perhaps Graham would like Americans of Muslim faith to be rounded up and sent to the same camps? 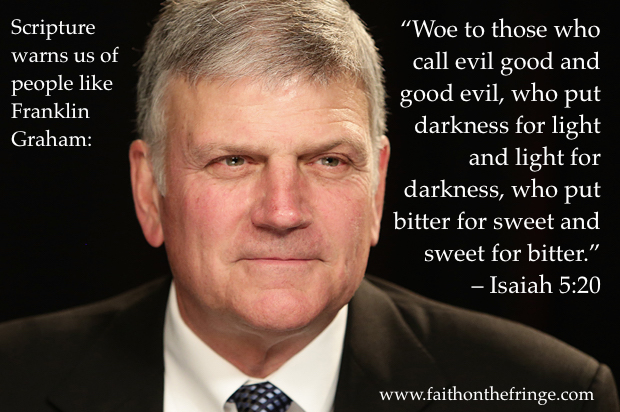 Franklin Graham before an interview at the Associated Press office on Tuesday, Oct. 15, 2013 in New York. (AP Photo/Peter Morgan)

Perhaps Graham forgets that the Lord told the Israelites in Deuteronomy 10:18-19 this is what we’re suppose to do:

People entering the United States seeking freedom and opportunity are given the same legal protections extended to all natural born citizens. This includes the basic rights enshrined in the U.S. Constitution:

Congress shall make no law respecting an establishment of religion, or prohibiting the free exercise thereof; or abridging the freedom of speech, or of the press; or the right of the people peaceably to assemble, and to petition the Government for a redress of grievances.

Graham has a twisted and distorted understanding of scripture – He demonstrates this nearly every time he opens his mouth.

With this ridiculous suggestion, he’s not only fanning the flames of bigotry and hatred, he demonstrates an astonishing ignorance of American history.

Graham would violate the Constitutional rights of legal residents of the United States rather than address the issue of why anyone in this country should have easy access to an assault rifle and 30 round clips.

In the bubble of willful ignorance that Graham and his followers inhabit, they seem to think that Islam – Muslims – is something that can be marginalized.

After a white supremacist murdered black Christian ministers in a church, should there have been demands that white supremacists be exiled from the United States? Or relocated to camps? Or not allowed to enter the country? When an extremist shoots an abortion doctor, should anti-abortion protestors praying outside clinics be rounded up?

Extremists can shoot up offices or churches and they can fly planes into buildings or blow up federal buildings.

They can also discriminate on the basis of religion or gender or sexual orientation.

But the danger, the evil in the soul of our culture, the insidious poison in our hearts is the wiliness to shred our Constitution and trample the rights of average Americans.

“As I have loved you, so you must love one another.”

What Bible are they reading, that they willfully miss the whole message of Jesus?

Maybe this small sample of scripture will help Franklin Graham and his followers understand what the Bible teaches about loving others:

Romans 12:10 Be kindly affectionate one to another with brotherly love; in honor …

Ephesians 5:2 And walk in love, as Christ also has loved us…

1 Thessalonians 3:12 And the Lord make you to increase and abound in love one toward another, …

1 Thessalonians 4:9 But as touching brotherly love you need not that I write to you: …

2 Thessalonians 1:3 We are bound to thank God always for you, brothers, as it is meet, …

1 Peter 1:22 Seeing you have purified your souls in obeying the truth through …

1 Peter 3:8 Finally, be you all of one mind, having compassion one of another, …

1 Peter 4:8 And above all things have fervent charity among yourselves: for charity …

1 John 4:21 And this commandment have we from him, That he who loves God love …

Franklin Graham isn’t out of his mind.

He’s evil. And he’s destroying the message of Jesus.

Like Loading...
This entry was posted in in the news, Scripture and tagged Franklin Graham, Islam, Jesus, John 13:34, Love each other, Matthew Paul Turner. Bookmark the permalink.

29 Responses to Franklin Graham is out of his mind