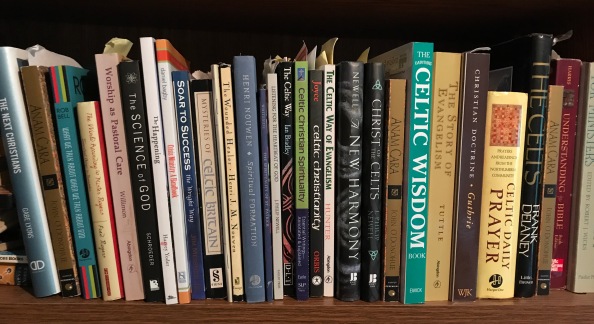 Christ of the Celts by John Philip Newell

Listening for the Heartbeat of God by John Philip Newell

… Basically, anything written by John Philip Newell. He is one of the world’s leading authorities on Celtic Christianity.

The Celtic Way by Ian Bradley

The Celtic Way of Evangelism by George G. Hunter III

Anything written by or about early Celtic Christian Pelagius

Wisdom of the Celtic Saints, by Ed Sellner

Water from an Ancient Well, by Kenneth McIntosh

How The Irish Saved Civilization: The Untold Story of Ireland’s Heroic Role from the Fall of Rome to the Rise of Medieval Europe, by Thomas Cahill

Life of St. Columba, by Adomnan of Iona; translated by Richard Sharpe

The Wounded Healer by Henri Nouwen

Life of the Beloved: Spiritual Living in a Secular World by Henri Nouwen

You Are the Beloved: Daily Meditations for Spiritual Living by Henri Nouwen

In short, everything written by Henri Nouwen. He probably had the greatest impact on me and my spiritual growth when I was in seminary.

Meeting Jesus Again for the First Time, by Marcus Borg

A New Kind of Christianity: Ten Questions That Are Transforming the Faith
by Brian McLaren

Brian is accessible, both in his writing and in person. This is a good book to begin with if your faith is growing from one level to another.

One of the more important books I read in seminary. It helped to shape my faith and theology. It is difficult, challenging reading, but worth the effort. Willimon is a really nice guy, and very affable. I’ve not met Hauerwas, but I’ve been told he curses, a lot.

I appreciate the teachings of

Other suggestions for children

Images of God for Young Children by Marie-Helene Delval

Who have I forgotten? Feel free to offer suggestions.

Some prominent names are missing. If you notice the omission of historical theologians like Reinhold Niebuhr, Paul Tillich and Karl Barth, then you probably don’t need my list.

If you plan to buy books, it would be great if you started your search here. “We are a participant in the Amazon Services LLC Associates Program, an affiliate advertising program designed to provide a means for us to earn fees by linking to Amazon.com and affiliated sites.”