Have you seen Night Will Fall, the HBO documentary about the film footage shot in April 1945 at the liberated Nazi concentration camps?

As allied forces liberated the concentration camps in the final months of WW II, they were accompanied by combat and newsreel cameramen who captured images of a reality more brutal and shocking than you can imagine.

And that was the point.

The plan was to create a film to be shown to German prisoners of war, a film that captured the atrocities of the Nazi government, so the stories of unimaginable camps could never be denied.

According to the documentary, the British Ministry of Information assembled filmmakers – from cameramen to directors and editors – committed to faithfully recording and presenting the reality of the war. Legendary directors Alfred Hitchcock and Billy Wilder both worked on the film.

But with the settling dust at the end of the war, interest in the project dropped off. A rough-cut was assembled by late September, but the project never saw the light of day.

More than a documentary about Nazi atrocities, Night Will Fall is a film about the making of the forgotten film, which includes never before seen footage.

We see civilians paraded through the camps, forced to confront the mounds of corpses starved to death, as well as modern firsthand interviews with survivors and the cameramen who filmed the camps.

The title of the film comes from the final line, “Unless the world learns the lesson these pictures teach, night will fall. But by God’s grace, we who live, will learn.”

Where was God when the Holocaust was going on? Theologians have discussed this question for 60 years.

Where was the Church? Both Catholic and Protestant leaders were on the side of the State in the early years of the Nazi Party. 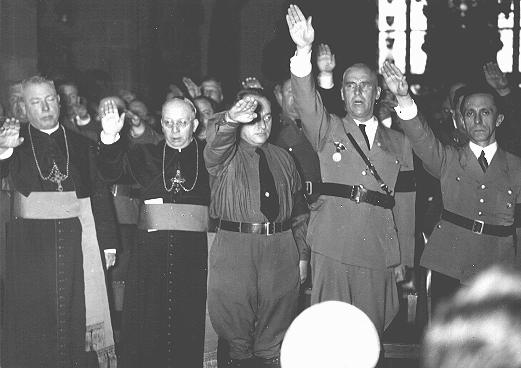 By the time Christian ministers tried to mount opposition to the régime, it was too late.

The question that ran through my mind while watching Night Will Fall was “where were the Christians?” Scholarly answers are both simple and complex.

But an obvious answer is an inherent flaw in the culture of Christianity.

“Unless the world learns the lesson these pictures teach, night will fall.”

Night fell in Christianity more than 1,500 years ago, as the counter culture movement of Jesus was appropriated by cultural, political and religious leaders.

Night fell in Christianity during the Inquisition. And during the 100 Year War.

Night fell in the halls of the Vatican and in the streets of Belfast.

Night continues to fall when Christians leave their churches and do nothing about homelessness, poverty and injustice.

Night falls when Christians demand death over mercy, when they celebrate killing and forgo kindness.

Night falls when Christians focus on violence and forget empathy.

Night falls every day Christians prioritize the government over the message of Jesus.

In the Christian world, night falls like blinking eyes in a sandstorm every time a Christian abuses the civil rights of others while demanding special allowances for themselves.

“Unless the world learns the lesson these pictures teach, night will fall. But by God’s grace, we who live, will learn.”

3 Responses to Night Will Fall