Why do Christians support executions?

For followers of Jesus, there is no justification for killing, ever. There’s nothing in the words of Jesus that says killing and executions are acceptable. In fact, the example of Jesus is exactly the opposite. With Jesus as our example, we should be willing to die, before we are forced to kill. 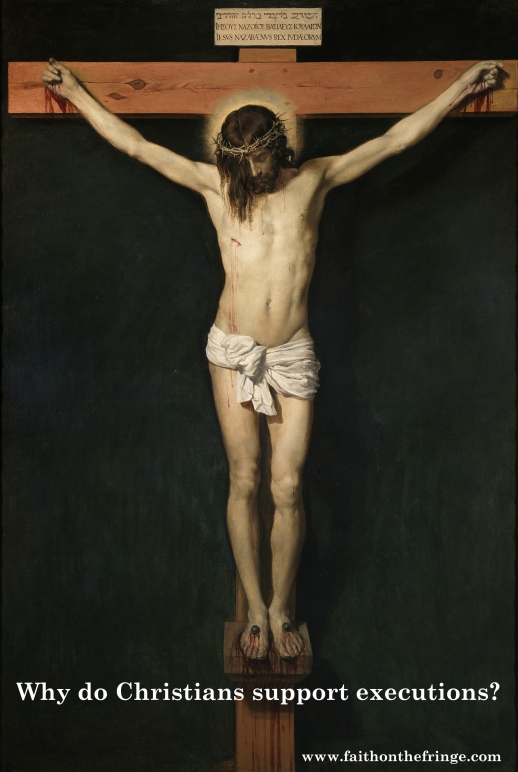 How do some Christians find justification for killing in the words of Jesus?

Look at it this way . . . in God’s Kingdom on Earth, if Christ was ruling, would there ever be a justification for killing during that perfect time?

Then if Jesus rules our lives, when we support killing, we are responding to the world in a worldly way, not in a way that would ever be acceptable in God’s Kingdom.

So, how did the message of Jesus get transformed from loving non-violence to justifiable murder?

Augustine of Hippo, in around the year 400, and nine hundred years later, Thomas Aquinas both changed the message of Jesus. Augustine justified killing and found original sin in human nature (“I cannot not sin,” wrote Augustine.). Today, these views are so ingrained in Christianity as to be considered Gospel.

But they aren’t Gospel and they certainly aren’t the teachings of Jesus. You can’t both love someone and kill them. And Jesus is clear on which we should do. Jesus’ view on original sin, and sin in general, is pretty straightforward as well – don’t sin.

There’s a story in the Bible about a woman who deserved to be executed, because that was the law under which they all lived. The crowd wanted an execution, wanted to murder a woman caught in adultery, but Jesus opposed the execution, and said:

“‘Let anyone among you who is without sin be the first to throw a stone at her.’ . . . When they heard it, they went away, one by one, beginning with the elders; and Jesus was left alone with the woman standing before him. Jesus straightened up and said to her, ‘Woman, where are they? Has no one condemned you?’ She said, ‘No one, sir.’ And Jesus said, ‘Neither do I condemn you. Go your way, and from now on do not sin again.’” – John 8:7-11

Jesus didn’t talk about her sin nature. Didn’t tell her to believe in him, lest she go to hell. He specifically said he didn’t condemn or judge her. He told her not to sin again, and sent her on her way.

And 400 years later, Augustine said that we’re all befouled by original sin and we’re all going to hell if we’re not baptized (including children who aren’t baptized.)

Augustine was opposed by a monk named Pelagius. Pelagius said that because we are created by God, in God’s image, then we’re not created with original sin and with the grace of God, we can live good lives and turn away from sin. Pelagius also thought it ridiculous that God would condemn babies.

Pelagius was eventually forced from Rome and died in obscurity, his views stripped from the theology of the Church. Today, original sin and the justification of murder are as accepted in some circles of Christianity as the singing of hymns. But they aren’t the teaching of Jesus.

Who was this Pelagius who believed we are created in God’s image and not in original sin?

He was a Celtic monk from Britain or Ireland. His faith in Jesus was formed on the fringe.

Like Loading...
This entry was posted in Uncategorized and tagged Augustine, Celtic, execution, Jesus, Pelagius, Thomas Aquinas. Bookmark the permalink.

2 Responses to Why do Christians support executions?