I saw these bumper stickers on a truck recently.

There’s so much going on here, I didn’t bother to look at the other side of the vehicle. 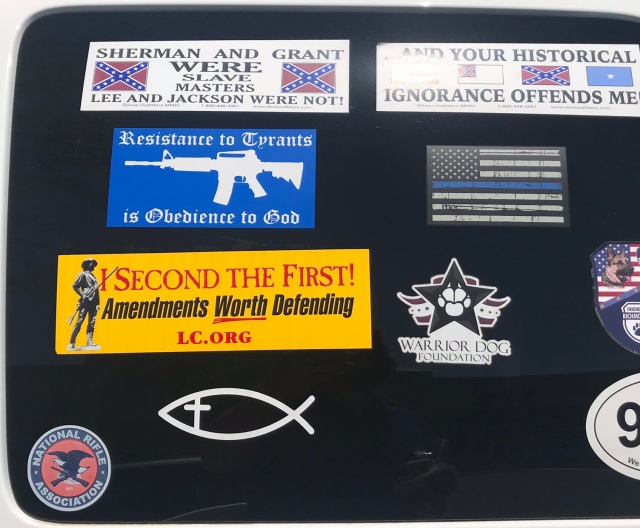 It’s a toxic mix of nationalism, violence, racism, ignorance, gun fetishism and bad theology. For example, armed resistance to tyrants is not obedience to God. Christ calls us to put away our machine guns, and follow him peacefully. Sherman and Grant didn’t own slaves, Lee and Jackson did.

Other stickers portrayed the owner as a serious church attender, including, this one:

In a recent article on HuffPost, Robert Jones, CEO of The Public Religion Research Institute, and author of The End of White Christian America, was quoted as saying:

“evangelicals have recently grown anxious about the declining dominance of white Christianity in America, both demographically and on such culture war issues as same-sex marriage.
“The idea of a Christian nation in American history has always been wrapped up with protecting the power of whiteness and Protestantism,” Jones said. “The KKK, for example, targeted not just African-Americans but also Catholics and Jews as threats to their ideal of American society.”

Millions of Americans are in Christian churches every week, and they have no idea of the message of Jesus, they have no understanding of the lessons of the New Testament, of the Jewish prophets, or of the traditions of the first generation of Christians.

With racist, frightened eyes, they look past God’s message to do justice and to love kindness and instead they focus on violence.

The greatest commandments — to love God and love others — become an afterthought as they focus on a handful of verses to justify their own bigotry and biases.

We who follow the teachings of the Prince of Peace, who strive to live the lessons of Jesus, must do more to help the misguided Christians who think violence is an answer.

Let me make it plain.

Guns are of the world, not of God.

God’s plan to redeem the world does not include guns.

You can not love others with a gun in your hand.

Like Loading...
This entry was posted in culture and tagged bad theology, Matt 22:38, Nationalism. Bookmark the permalink.