In a world growing more violent, filled with those who accept violence as the cost of living in the world, our thoughts should turn to Mohandas Karamchand Gandhi.

He led a non-violent protest that freed India from British rule and inspired Martin Luther King, Jr. to lead a similar non-violent civil rights struggle in the United States.

Non-violence brought Britain to its knees and ushered in massive change in the United States.

“Poverty is the worst form of violence.”

Gandhi’s lesson is that love of others, love so great as to not ever respond with violence, can in fact change the world.

“You must make the injustice visible, and be prepared to die like a soldier to do so.”

Non-violence, beginning individually and expanding to recognize the divine in others, can change the world, one person at a time.

“I am a Muslim and a Hindu and a Christian and a Jew and so are all of you.”

Like most internationally recognized individuals, his legacy is not without controversy.

There are accusations of racism when as a young attorney in South Africa he defended the rights of Indian workers to the detriment of indigenous workers. Prejudiced, perhaps. But racist was the system of oppression that he fought first in South Africa and then at home.

“The cry for peace will be a cry in the wilderness, so long as the spirit of nonviolence does not dominate millions of men and women.”

Some respond to the idea of non-violence by saying the world had to use violence to stop Hitler. The argument misses the point. Germans, and German soldiers, could have stopped Hitler by refusing to invade, refusing to fight, refusing to kill or murder. More than 20,000 German citizens would have survived the war, if Allied forces had refused to bomb an unarmed city of civilians.

Violence can be stopped by refusing to be violent; rejecting physical violence, as well as spiritual, emotional, and economic violence.

“An armed conflict between nations horrifies us. But the economic war is no better than an armed conflict. This is like a surgical operation. An economic war is prolonged torture. And its ravages are no less terrible than those depicted in the literature on war properly so called. We think nothing of the other because we are used to its deadly effects. … The movement against war is sound. I pray for its success. But I cannot help the gnawing fear that the movement will fail if it does not touch the root of all evil — man’s greed.”

For a good article about Gandhi, click the image below: 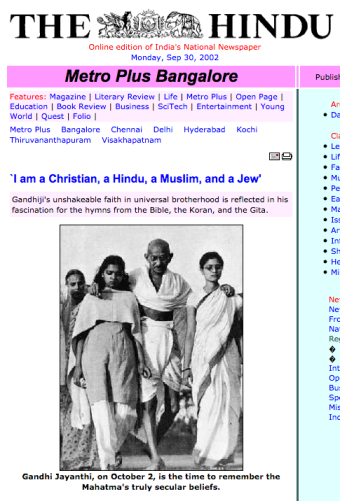 (Bapu is the nickname Gandhi received as the “father,” of India.)