People yelled as they witnessed a man being assaulted.

Most of us have seen the video of a passenger being dragged off a United Airlines flight. 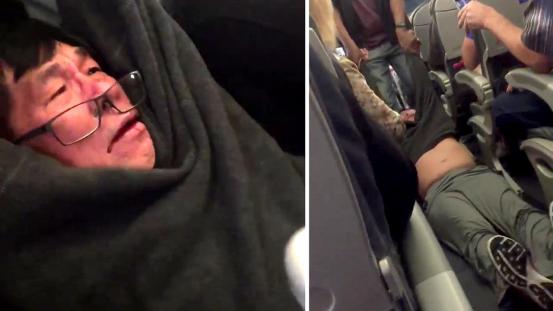 A very few, as some usually do, blame the victim for not complying with the demands of corporate employees or the men with guns.

We still don’t know all the details.

Witnesses on the flight say they were offered $800, United claims they offered $1,000, to surrender their seats. The fact is, not enough people were willing to vacate the plane so that four United employees could take their seats that day.

The man clearly was not combative during the videos I’ve seen, his body was limp as he was dragged out.

The official police statement claims he fell, and that’s how he ended up bloody. But anyone with eyes can clearly see that’s not what happened.

Inexplicably the man ran back onto the plane, bleeding. According to his lawyer, the victim had a broken nose, lost teeth, a concussion, and trauma none of us would want to experience.

On the video we can hear other passengers yelling in response as he was attacked by armed men and dragged from the plane.

Despite the yells and protests, what we don’t hear on a video is anyone trying to stop the assault. In all the news coverage, I’ve never heard if someone offered to take his place, to give up their seat, so he could remain. People yelled, but they didn’t come to his assistance or defend him.

Instead, what this is, at the end, is more video of another assault where witnesses do nothing.

This is the best comment I’ve seen about the incident:

Someone in authority—pilots, stewards, ground crew—might have realized that this was an assault on a person’s dignity. But no one stopped it. Why not? Not because they are bad people: They too probably looked on in horror. But because they have been conditioned to follow the rules.

Those rules said: First, we may sometimes overbook because we want to maximize our profits. Second, we can eject someone because we have overbooked, or if we decide that we want those seats back, no matter what a person can reasonably expect, and no matter how much of an inconvenience this is. And third, and most tragically, human dignity will not get in the way of the rules. A toxic cocktail of capitalism and corporate culture led to a man being dragged along the floor. (Read the article, here.)

And people did nothing. No, they yelled, as the man was assaulted. It easily could have been anyone else on the plane. The man with the gun who committed assault has been suspended, but not identified or investigated as quickly as the victim.

Also in the news at the same time, video of a police officer slamming a 22 year old female college student to the ground.

(Google “police slam student,” and see how many times it’s happened in the past few years. Men with guns throwing people, usually much smaller, teenage females, to the ground.)

When did the USA become a society that responds this way? How did people in authority begin escalating nonviolent confrontations and respond with violence? Can you imagine how bad it was, before everyone carried a camera?

When did it become acceptable for people to stand by and only yell when they witness abuses of power and of unarmed young women?

The distance between outrage and action is immense, filled with the prospect of personal discomfort. That gap grows wider every time the rights and dignity of others is assaulted and witnesses do nothing.

Safely removed by distance and time, people are boycotting the airline. Given the CEO’s horrible response to the incident, a boycott is more than justified. But the issue isn’t a single airline. It’s a systemic acceptance of violence. A failure of character and training among men with guns. A cultural acceptance of violent responses to non-violent situations.

But at least they yelled.

All that is necessary for the triumph of evil is that good men do nothing.

Like Loading...
This entry was posted in culture, in the news and tagged United. Bookmark the permalink.