Did Jesus die for our sins?

Did Jesus die for our sins?

That’s a common question the week between Palm Sunday and Easter.

Jesus took on the sins of the world, suffered and died, so that we might have eternal life.

This was the point of Jesus, right? To die for our sins?

If that was the point, then Jesus might have mentioned it. But he didn’t. Nowhere in the Bible does Jesus say he’ll die for our sins.

Jesus said he would die and return. He didn’t say he was taking the sins of the world with him.

That idea is in the Bible, but it came about nearly 50 or 60 years later, and is only in the letters in the New Testament, not in the teaching or actual words of Jesus.

When we consider the teaching, death and resurrection in the context of the people at the time, we see a different story.

Anyone can die; everyone will. But only the son of God can overcome death and live again.

“Jesus performed many other signs in the presence of his disciples, which are not recorded in this book. But these are written that you may believe that Jesus is the Messiah, the Son of God, and that by believing you may have life in his name.” ~ John 20:30-31

Jesus died and was resurrected to prove he was who he said he was — the son of God. He was executed and came back to life. And then people saw him.

A person named Celopas, along with someone else, encountered Jesus on the road to Emmaus. 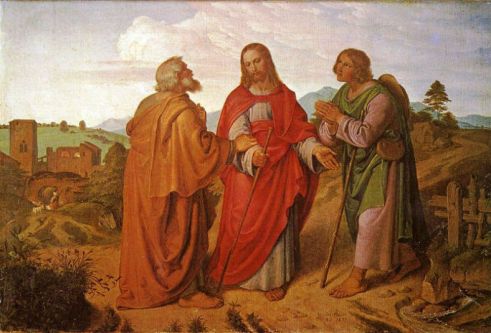 Photo from the Lumo Project

Jesus talked with a lot of people.

“Then he opened their minds so they could understand the Scriptures. He told them, “This is what is written: The Messiah will suffer and rise from the dead on the third day, and repentance for the forgiveness of sins will be preached in his name to all nations, beginning at Jerusalem. You are witnesses of these things. I am going to send you what my Father has promised; but stay in the city until you have been clothed with power from on high.” ~ Luke 24:45-49

The account in the Gospel of Luke mentions repentance for the forgiveness of sins. But as it’s written, it can easily mean repenting because you’ve been forgiven. Not insisting you repent, before you’re forgiven. But more important, it doesn’t mention Jesus sacrificing for our sins, it says the disciples witnessed the risen Christ.

“Then the eleven disciples went to Galilee, to the mountain where Jesus had told them to go.  When they saw him, they worshiped him; but some doubted. Then Jesus came to them and said, “All authority in heaven and on earth has been given to me. Therefore go and make disciples of all nations, baptizing them in the name of the Father and of the Son and of the Holy Spirit, and teaching them to obey everything I have commanded you. And surely I am with you always, to the very end of the age.” ~ Matt 24:16-20

That might have been a good time for Jesus to mention he’d accepted the sins of the world. Instead, he reminded them to do what he had commanded, which was love people.

Jesus didn’t die for our sins, he died to prove who he was. A little more than 2,000 years ago God walked the earth as a human. He was executed by the government and then he came back to life.

They knew Jesus was from God, of God, and the son of God. They began to earnestly share his message of love, and all that meant.

They began spreading the message of Jesus, and that message had traveled far across the region by the time the letters of the Bible were written, and without any other written documents.

The message was simple and remains simple.

God loves us and wants us to love God and to love others. To prove it, God was born, God died, and God was resurrected.

Thanks be to God.

Like Loading...
This entry was posted in Uncategorized and tagged Celopas, Jesus, John 20:30-31, sin, substitutionary atonement, the road to Emmaus. Bookmark the permalink.

1 Response to Did Jesus die for our sins?