The Bible is clear.

Jesus is with the losers, not the leaders. Jesus was an unemployed Palestinian.

Jesus is the dark-skinned woman cleaning your table, your hotel room, your office.

Jesus was the poor child of an unmarried mother, not the child of a millionaire or a celebrity.

Jesus inherited his family’s poverty, not millions of dollars or a position of power and privilege.

Jesus was dark-skinned, dirty, and a victim of the government.

Where would Jesus be, today?

Someone responded that Jesus wasn’t poor, he was middle class. 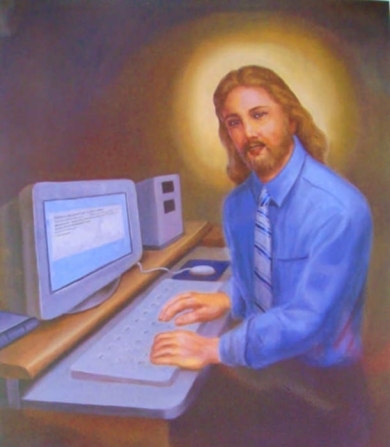 Let’s ignore the fact that the “middle class” is a post-industrial creation and if anything, Jesus might have been in the artisan class because of his stepfather’s work as a carpenter.

In the Gospels, for three years Jesus has no job, no home, no money, no visible means of support beyond handouts from others.

A homeless man with no place to lay his head. At one point, he’s so exhausted he falls asleep in a boat and sleeps through a storm.

The real issue behind the middle class Messiah is the implication that “Jesus is middle class, just like me.”

Jesus wasn’t just like you if you’re a white, middle class, American Christian.

Jesus was nothing like you if you are paid almost $1 million a year from two charities.

Jesus didn’t have board meetings or hold membership votes.

Modern Pharisees and Sadducees dominate mainstream Christianity and stroll the halls of political power. You can’t be like Jesus and side with his oppressors.

Too many of us create god in our image rather than recreate ourselves in God’s image.

With Jesus, extreme vetting is, “neither do I condemn you, go and sin no more.”

Following the Way of Jesus is inconvenient and counter to the lessons of the world.

Jesus demands our attention and guides us to a new way of being. You can allow yourself to be transformed, to live the teachings of a homeless man. Or you can create Jesus in your own image, and worship a god who’s just like you.

Like Loading...
This entry was posted in culture, Uncategorized and tagged Jesus, middle class. Bookmark the permalink.