The Bible is a collection of 66 (or 73) different books, some history, some poetry, some songs, some letters, as well as the rules of an ancient religion . . . written over the span of 1,600 years. Problems arise when people can’t tell one from another, and confuse them into each other.

Problems arise when you try to take a rule written for and by a certain group of people, and apply it to your life today (taking your disobedient child to the gates of the city to stone him, for example).

Some people believe in Biblical inerrancy – the idea that the Bible is “without error or fault.” This idea has only been around since the mid 1970s. They say the inerrancy is in the original manuscripts of the Bible, but there are no original manuscripts remaining, just copies of copies of copies of copies – but there are a lot of those copies. When people say the Bible is inerrant, they demonstrate they either don’t understand what they are reading, aren’t reading very closely or critically, or are simply lying to themselves.

(I’ve never encountered someone who believes in the inerrancy of the Bible who’s reading it in anything other than English. I don’t believe they’re reading the Septuagint – the Greek translation, the Latin Vulgate or the Hebrew Tanakh. For this reason, the idea of a Bible without error is simply ridiculous.)

People tend to focus on the words in the Bible, and miss the message behind the story. The creation story of Genesis 1 and 2, for example, are poetry, the message is that God is powerful, neither of which is a history lesson.

Adam and Eve is a metaphor — not literal history. It’s poetic parable – an origin story, not the literal story of two people, for example.

There are many translations available, Unless you’re used to reading Middle English like Shakespeare, I would avoid the King James Version.

The King James version of 1611 is based on the Geneva Bible of 1560. A lot has been learned since 1611, (the Dead Sea Scrolls found in 1948, for example) that didn’t inform the translators of 1611, and the KJ version has major translation problems. It was reprinted in 1622 to correct hundreds of mistakes. 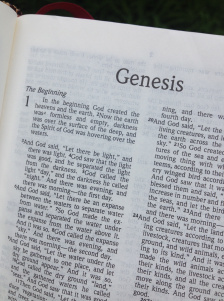 Why are there so many KJV out there today? The KJV isn’t copyrighted, and is free to reprint and sell.

Even the New Revised King James Version is pretty poor, despite being significantly revised so that it would be eligible for a new copyright. There’s also the New American Bible, the New Revised Standard Version and the New American Standard Bible or the New International Version and the New Living Version. (If the United States Copyright Office, a part of the Library of Congress, believes that a Bible version is so different from previous versions, that it’s eligible for copyright, how inerrant can it be?)

The Bible as God’s Word

Of course the Bible isn’t THE WORD OF GOD . . . it’s translated into a language we can understand – Jesus didn’t speak English when he was walking around Capernaum, for example.

But the Bible is God’s Word . . . meaning the message, not the medium or the method, is what God tries to tell us.

The last thing non-believers need is a so-called Christian telling them they need to believe every word of the perfect Bible, (including the provision of taking our unruly children out to the gates of the city and stoning them to death.)

If God wanted the Bible to be the Truth and perfect wouldn’t it be more clear? Jesus spoke in parables because he wanted us to learn for ourselves, not blindly accept what we are fed. And unless we’re reading the Pentateuch in Hebrew and the Septuagint in Greek, we English speakers have really no idea what the Bible really “says.”

Look at Jesus’ ‘last words” on the cross, for example. Different Gospels give him different words. Did he say all of those words at one time? Or did different witnesses hear different things? Does it matter? It doesn’t matter to me what exactly he said. It matters what he did . . . . resurrected three days later and was witnessed by hundreds of people. 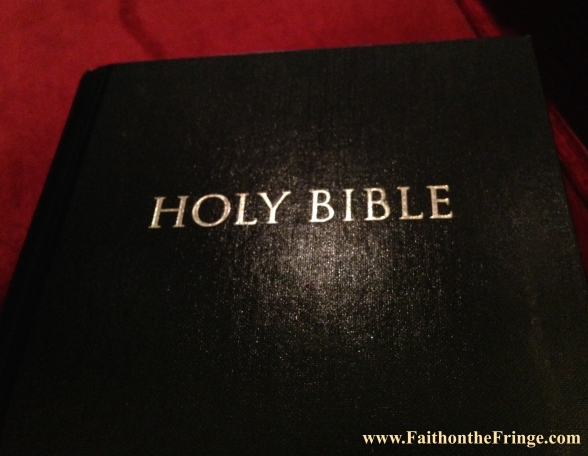 5 Responses to The Bible