The eighth night of Hanukkah — tonight and 84 years ago

The eighth night of Hanukkah, 84 years ago: 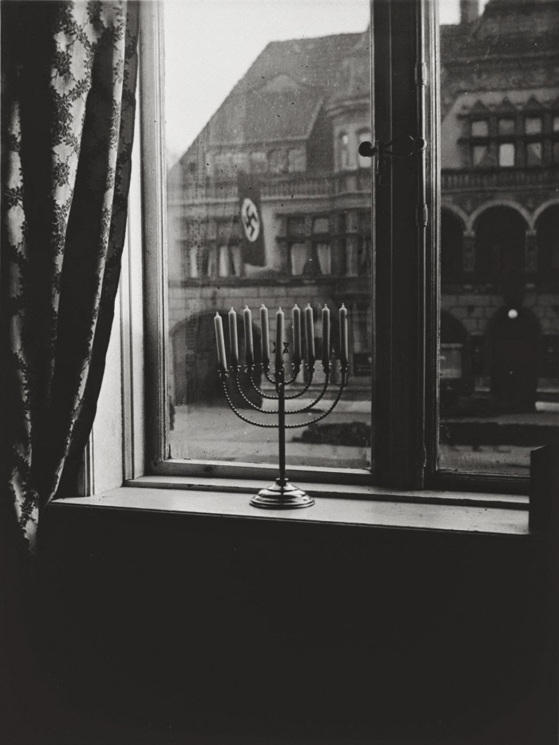 Inscribed on the back of the photo: “Chanukah, 5692. ‘Judea dies’, thus says the banner. ‘Judea will live forever’, thus respond the lights.”

84 years ago, hate, vitriol and racist lies were reaching a fever pitch, sweeping across the land of my ancestors. (http://rarehistoricalphotos.com/menorah-defies-nazi-flag/)

We in the United States face unabashed fascism and shameless hate today.

“. . . granting 10,000 Syrian refugees asylum on our shores is not fascism. But barring them, or blocking any and all Muslim persons from entering the U.S. simply because of their religion and because one person—one single person of that religion—was once able to slip through our visa vetting process and launch an attack that generated only a fraction of the casualties that Americans inflict upon themselves each and every weekend, while granting greater voice to those who argue that “America is at war with Islam” and justify increasing anti-Muslim hate speech and violence … pretty much is.”  (Fascism: It’s what all the cool kids are doing these days)

After seven years of the Tea Party and a Republican Party unwilling to work with the nation’s first black president, hate, vitriol and racist lies have reached a fever pitch. Just look at the headlines from the past few weeks.

Donald Trump on terrorists: ‘Take out their families’

Donald Trump Defends Disabled Reporter Impression: “I Do Not …

The Most Fascinating Thing About Donald Trump’s Racist Tweet

How anti-immigrant attitudes are fueling support for Donald Trump

Muslims Terrorized When Cafe Gets Bombed

On this final night of Hanukkah, the celebration of an eight-night miracle so long ago, let us remember in less than a lifetime, less than a heartbeat, pent up bigotry and hate can be unleashed and focused with deadly consequences.

Let us not fool ourselves into believing that it can’t happen again or that it can’t happen here. For people today who are victimized, it is happening here, today. And yet again, just like 84 years ago, otherwise goodhearted people close their eyes to the possibility, or worse yet, believe that there’s a place for bigotry and hate in our modern country.

Like Loading...
This entry was posted in Civil Rights, in the news, Uncategorized and tagged Donald Trump, Fascism, Hanukkah, justice, syrian refugees. Bookmark the permalink.