It says something about the state of Christianity in the United States when the Pope, the Bishop of Rome, the head of the Roman Catholic Church, is heralded as liberal.
My Facebook feed is filled with posts from all sorts of progressive Christians celebrating every step and comment of Pope Francis as he makes his way from American city to American city. 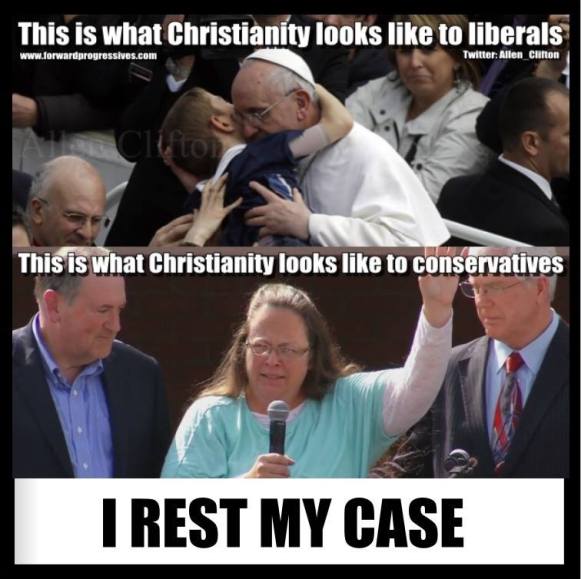 I’m a progressive Christian, but I’m also a product of the Protestant Revolution. I affirm the positive messages the pope preaches, but as a progressive Christian, I can’t overlook the Roman Catholic Church’s positions against women serving as priests and against women controlling their own reproductive rights, including access to birth control and the right to terminate pregnancies.

As a Christian, I believe each of us, women and men, are made in God’s image spiritually, and that God calls each of us. I reject the Roman Catholic belief, the Fundamentalist Christian belief, and the Muslim belief that women are to be treated differently and afforded fewer rights than men.

Pope Francis seems a wonderful man, but no matter how progressive he may be, he leads a Church that still believes it alone holds access to salvation offered by God – that other Christians the Roman Catholic Church, the church that claims it was created by God.

(Note: I’ve received a lot of comments concerning the previous sentence. So, I’ll change it to say “are second class Christians because we aren’t members of“)

Francis may say, ‘it’s not for him to judge,’ but for 1,500 years his organization has judged. And it will continue to judge long after he is gone.

In our current political and theological climate, this is what passes for liberal. Rather, some more progressive views of Pope Francis obscure the hard truths of the conservative Catholic Church.

Of course, Fundamentalist Christians and the far right already reject the Pope and the Catholic Church, so there’s little that Francis says that leads to much soul searching on the far right. With more similarities with the Catholic Church than differences, Fundamentalist Christians have already elevated their male pastors beyond the level of a ‘priesthood of the believer,’ while marginalizing women and the LGBT community and their rights.

But I suppose it’s true, in the land of the blind, the one-eyed man is king. In a theological landscape dominated by far right conservatives, any progressive position, no matter how uncharacteristic, is worth celebrating.

Like Loading...
This entry was posted in Civil Rights, in the news and tagged Catholic Church, Fundamentalist Christian, Muslim, Pope Francis, priesthood of the believer, women's rights. Bookmark the permalink.

14 Responses to Popes and Protestants