This week marks the 50th anniversary of the murder of white Civil Rights activist Jonathan Daniels. 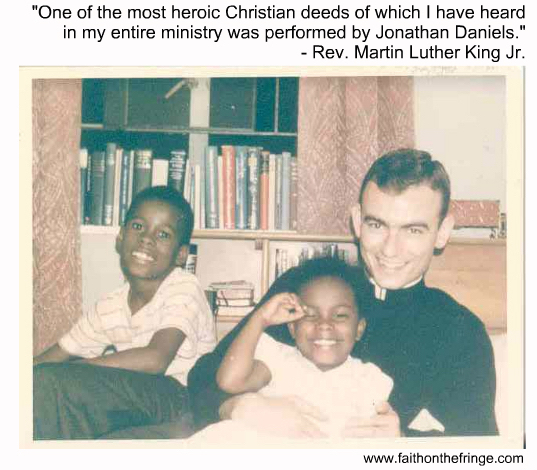 Faith on the Fringe has many international readers. For some, and for younger readers who may not understand the depths of the Civil Rights struggle in the United States, the death of Jonathan Daniels is a stark example of people being wantonly gunned down in broad daylight simply for demanding all Americans be treated equally.

Daniels, a 26 year-old Episcopal seminary student, was killed Aug. 20, 1965 while saving a 17-year-old African-American girl from a shotgun blast. A graduate of Virginia Military Institute, Daniels knew exactly what he was doing when he saw the shotgun leveled at Ruby Sales and pulled her out of the way.

In Virginia, Episcopal Churches are recognizing his work and martyrdom.

“I began to know in my bones and sinews that I had been truly baptized into the Lord’s death and resurrection…with them, the black men and white men, with all life, in him whose Name is above all names that the races and nations shout…we are indelibly and unspeakably one.” – Jonathan Daniels

Daniels continues to be honored for his sacrifice: http://www.montgomeryadvertiser.com/story/news/local/alabama/2015/08/13/people-arriving-country-honor-daniels/31683589/

For more on Daniels’ story, visit:

His murderer was acquitted by an all-white jury.

Sadly, the struggle for equality and civil rights continues.